The 'Billing for gardening service' workflow assists in the billing of clients, by generating and sending bills as soon as a job has been completed. Managers track payments easily, and a payment reminder is sent if necessary.

A step-by-step guide to Billing for gardening service

This guide will explain the 'Billing for gardening service' workflow step by step.
It makes use of numerous screenshots, but if you'd like to follow along in the Kotive webapp, you can sign up and copy the workflow into your account for free.
Keep the workflow open in a separate tab in your browser, and interact with it while reading the steps in this guide.

Section 1: Compile and send a bill

In this section, the gardener compiles the bill in a simple form, and it's sent to the client and the manager.

The first part of this form is a paragraph that's titled: !!! IMPORTANT CHANGES you need to make BEFORE running this workflow: This paragraph contains instructions on how to personalize the workflow for you and your company. If you intend to run the workflow, these changes can not be ignored.

The workflow starts when the gardener fills in this form with the details of the completed job. 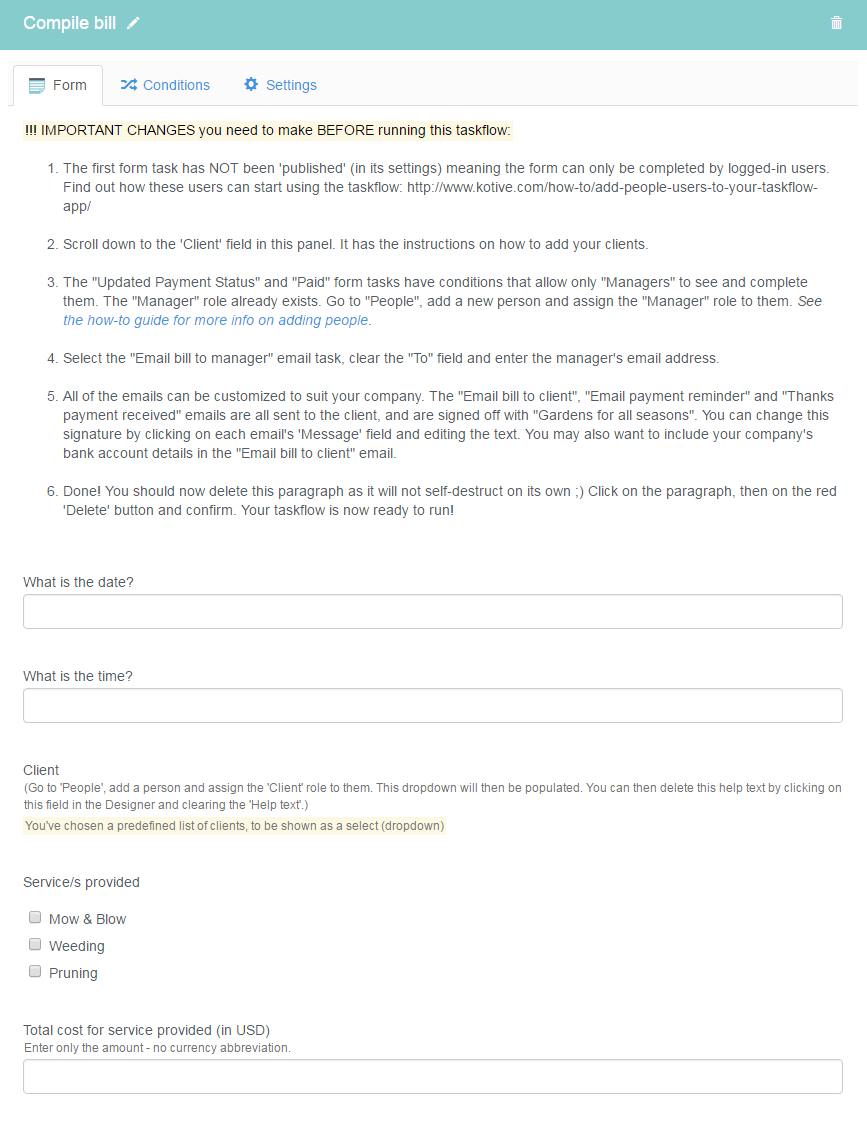 The client receives an email with the details of the completed job, and the total amount due for the work done. They're given a reference bill number, and asked to make payment into the company's account.

Kotive creates the content of the email by pulling in the details from the first form.

Let's start by looking at how the email is typed up. There are lots of normal looking text words, but there are also lots of rectangular, shaded in, blocks of text. What's the difference?

Well, the normal text is just that: normal text. There's nothing special about it. But the blocks of text are actually information that is being pulled in from the first form. If you click on the text area of the email while in the webapp, you'll see that it changes and suddenly looks like a lot of code with lots of curly brackets { } and numbers. This code (also called dynamic field tags) is what tells these fields of text what they're going to end up saying. When this email gets sent to the client, it won't look like it does now, it will all be normal text, because the workflow will look at the previous form and put the information from that form into this email. 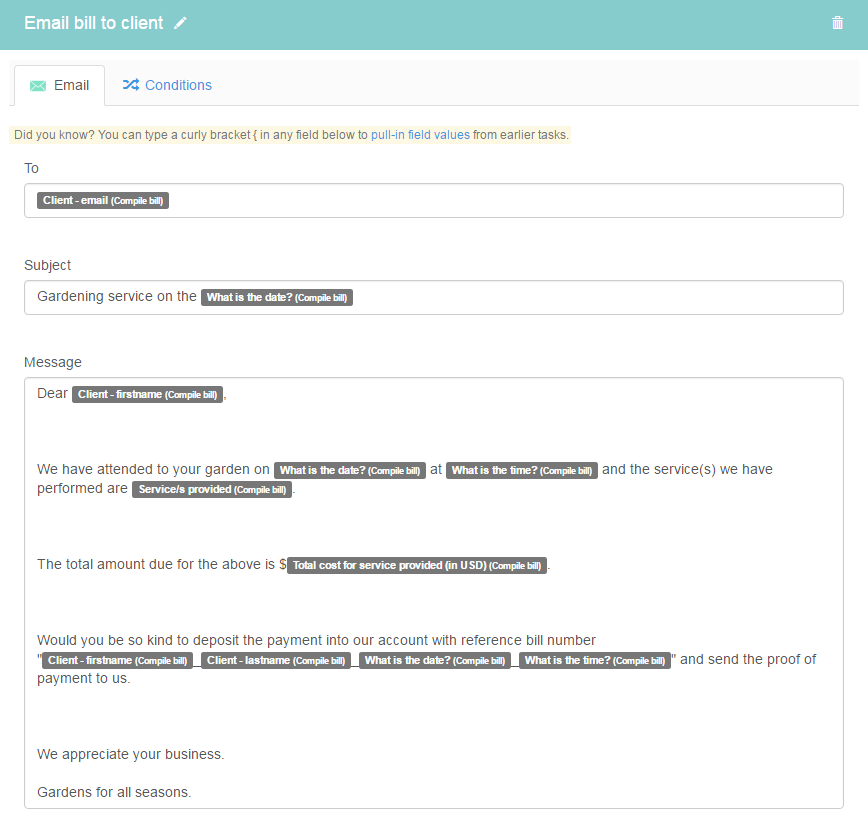 The manager receives an email with the details of the completed job, and the total amount due for the work done. The reference bill number is displayed, and the manager is instructed to update the payment status in the next form task. 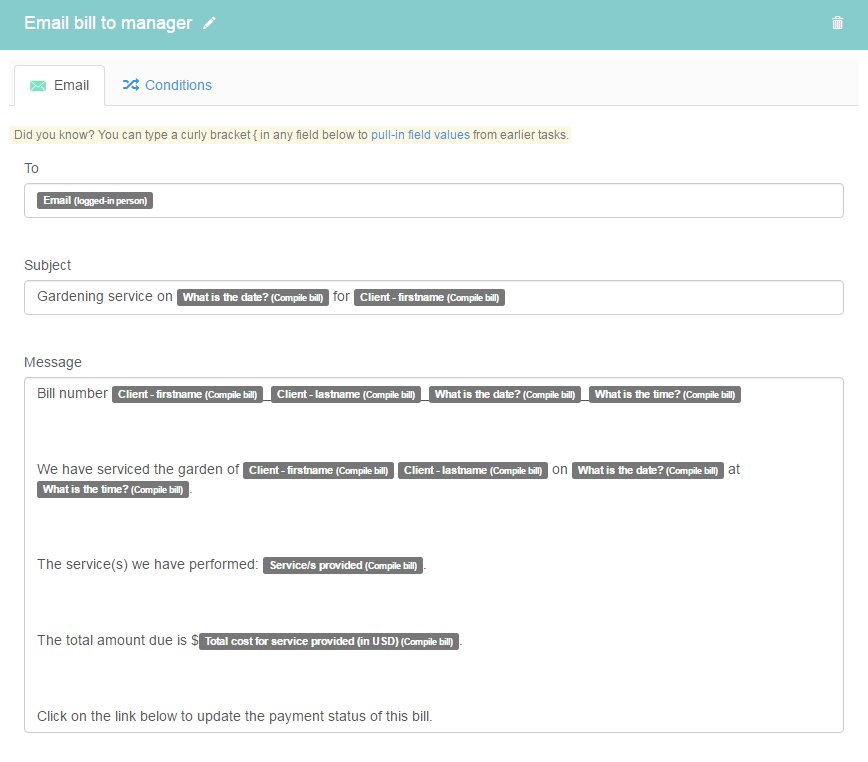 The manager indicates if payment has been made, and a payment reminder is sent if necessary.

This form task has one condition:

Activate this task when...
'Role' IS 'Manager'

After this form, there are three tasks which can potentially be activated next. If the manager indicates that the payment hasn't been received, then the 'Email payment reminder' email task and 'Paid' form task are both activated. However, if the manager indicates that the payment HAS been received, then those two tasks are skipped, and the 'Thanks payment received' email task is activated instead.

This is possible because of conditions. 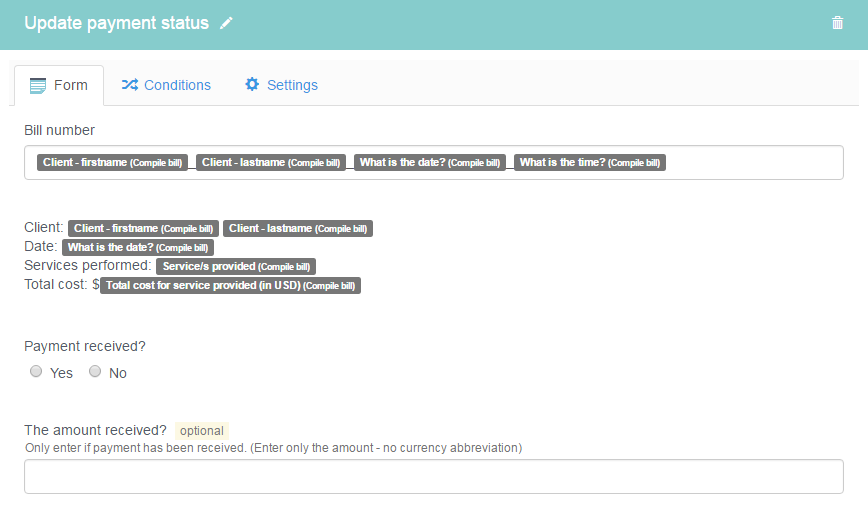 This email task has one condition:

Activate this task when...
'Payment received?' IS 'No'

This email will only be sent if the manager indicated that the payment hasn't yet been received in the previous form task.
The client receives an email reminding them that their payment is outstanding. 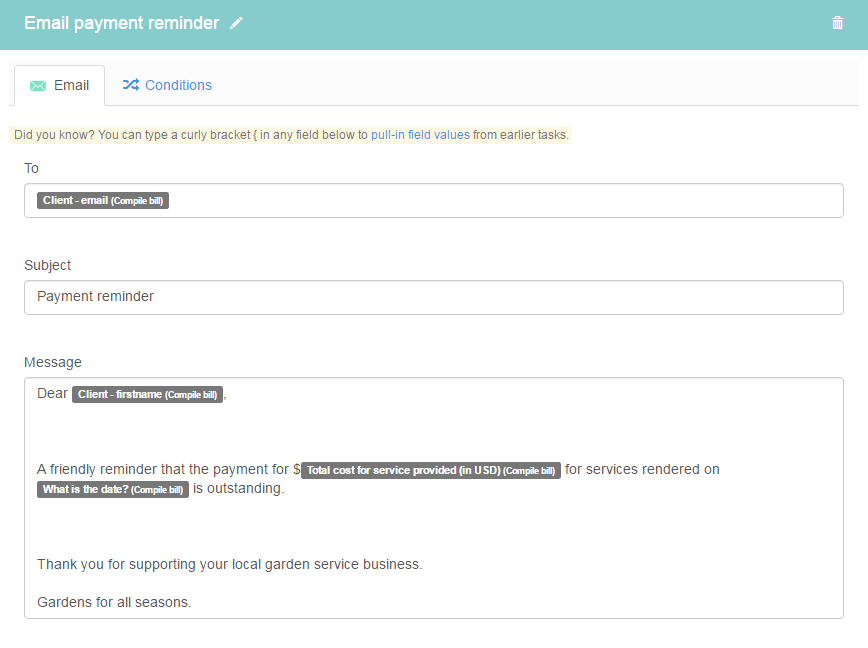 This form task has two conditions:

Activate this task when...
'Payment received?' IS 'No'
AND
'Role' IS 'Manager'

This email task has two conditions:

Activate this task when...
'Payment received?' IS 'Yes'
OR
'Invoice paid' IS 'Yes'

This email will be sent as soon as the manager indicates that the payment has been received, EITHER in the 'Update payment status' form task, OR in the 'Paid' form task. 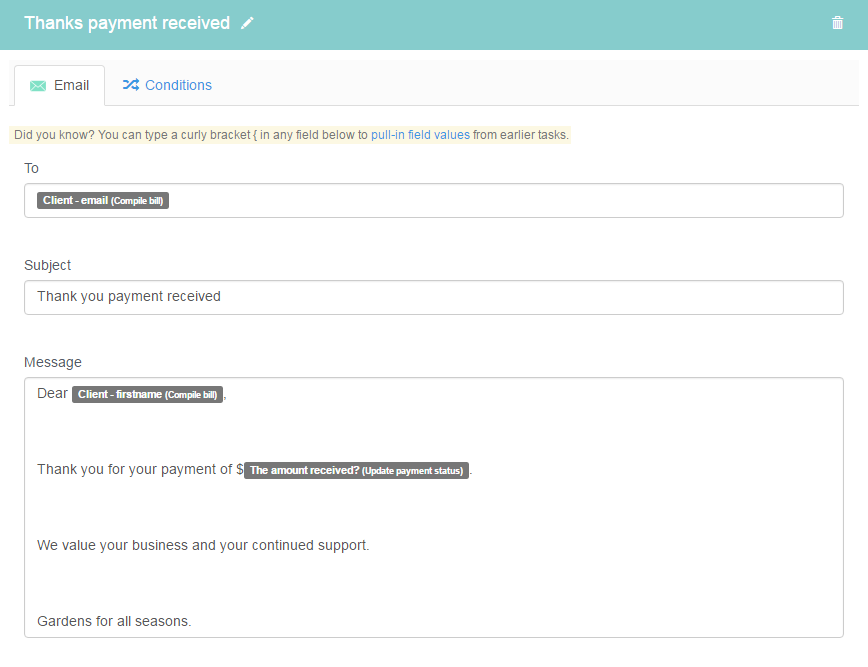 After the last email is sent, the 'Billing for gardening service' workflow is complete.

Get started now and clone this workflow directly into your Kotive account for free.

The Billing for gardening service workflow is automatically copied into your account when you select it. Want to make one or two changes to fit your situation better? No problem!